by Jennifer Davies - Wed, 17 Jun 2015
Still only 21, Swiss-American Stefan Bachmann has already notched five years as a bestselling author, and he only writes part time! Growing up in Zurich, at 16 he wrote the acclaimed novel, The Peculiar, and now he's finished his third, The Cabinet of Curiosities. Yet Jennifer Davies finds there's more than one string to this prodigious talent's bow.

Starting in your childhood, you've said "I was homeschooled, which I assume explains everything". How important do you believe it was to your success?

I don't think I would be either a composer or a writer now had I not been homeschooled. My mom could tell what I was good at and interested in, and could tailor my courses accordingly. We had music and sport classes at public schools and at the Zürich Conservatory, and did all our academic classes at home with curriculum from the US or England. For me the focus was on literature and music, instead of say, math and science like my older brother. I still had to do math and science, alas, but they weren't the main subjects.

When did you decide to write The Peculiar? 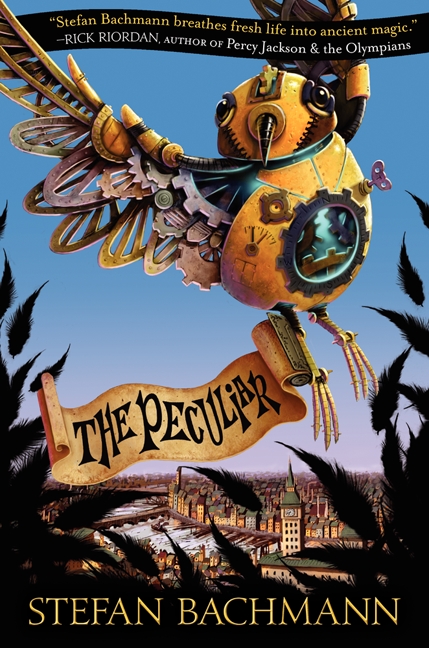 I remember it pretty clearly: It was January 2010 and I was 16 at the time, and I had just finished drafting a different book, but wasn't quite sure if it was terrible, or worth pursuing, or if I should scrap it and write something new. So I went on a walk and started thinking about English fairy tales and Steampunk* and Victorian society, and by the time I was home again I had the first scene of The Peculiar.

Was The Peculiar the first book you ever wrote?

No, I wrote four others first, and before them, I wrote a really horrible fan-fiction version of The Hobbit. I was obsessed with all things Middle Earth after my mom read the books aloud to me. It ended up being exactly the same as The Hobbit, only without actual grammar and coherence.

How much harder was it to write your second novel?

The second book (The Whatnot) wasn't as hard as I was expecting. I wrote it in the year between selling The Peculiar and the first edition being out in bookstores, so there was no pressure. It's been much harder writing my third book, since it's not a sequel and it's completely different from my other books.

You write in the Steampunk genre. Do you ever worry about being typecast as a "fantasy" writer?

I definitely plan to write outside that genre, and I am right now. I don't mind being typecast as anything, though. I love fantasy and I love children's and young adult books, and I love literary fiction and non-fiction, too. I'd like to try out all sorts of genres. I think what's great about being writer is that people can typecast you all they want, but that doesn't mean you have to listen to them.

It comes as a bit of a surprise to learn that you are studying music composing at university, rather than writing or literature.

I never really thought to study writing. My teachers are pretty skeptical of anything not musi-related, so writing usually happens during vacations and on weekends. I think the best way to learn how to write is to read a ton, and then write a ton. You can do that anywhere, and while I have friends who are studying creative writing and I know there are benefits, having a degree in it doesn't make you a better writer, or guarantee a book contract. Writing is pretty solitary, and going to university has been a great experience. It's stressy combining the two. There's a lot of homework and tests, and music is a tough thing to study, but the Zürich University has been really helpful; they're letting me study an extra year to get the necessary credits to graduate, since I've had to miss so many classes.

What do you love so much about writing?

I like how challenging it is, and that it's detail-oriented and big-picture at the same time. I also love the process of seeing characters and setting and plot come together, and trying to make words into something alive.

Were you prepared for the success of your books?

I don't remember thinking about it much. There are signs leading up to release that let a publisher know what to expect. How many publishers wanted to buy it? Did Barnes & Noble order displays? Are the bookseller reviews good? So it gradually built up until release, and then I went on tour and was really surprised, but in a good way. I'm really grateful that people decided to read it.

Do you have any siblings? If so what do they think about your career?

I have four siblings, three older, one younger. They're the best. They've been really supportive and read everything I write... long before anyone else.

What's it like to be so successful in your field at such a young age?

It's definitely a strange experience: you're growing up and figuring out the world like every other teenager, but at the same time you're working as much as most adults, and you have deadlines and contracts and you must learn how to thrive under pressure. If there's media involved, you need to learn to not care about scrutiny. My situation is infinitely smaller in scale than some (luckily), but I have tons of sympathy for child actors and child musicians, and how crazy they often become. However, I've been able to travel all over the world and meet awesome readers and publishers, and I've had a ton of experiences, good, bad, and super awkward, that I never would have had otherwise. It's all good writing fodder.

How do you balance being both a student and a touring bestselling author?

I don't think about the book side of things when I'm at university. I cringe every time a classmate or teacher finds out I write books. I really don't enjoy the self-promotion aspect, but touring is usually great, and I can separate myself from normal life a bit. When it's here it's nice, and when it's gone again, I'll be ok with that.

What do you think has been the secret to your success?

I worked a lot, gave up a lot of time, and also really loved doing it. I think you need to be passionate about what you do for other people to care even a tiny bit.

What makes you happy in your work and life?

I'm happy in work when I've done something I'm pleased with, which is rare, because I'm very picky. In life, I like cooking, sitting down with a good book or watching a movie or improvising on the piano.

What are the plans for the future?

I have two more standalone books coming from Harper Collins sometime in the next few years, and after that I just hope to continue writing and being a musician. Fingers crossed!

I don't really care if I'm remembered, but if one of my books would be, that would be cool. I'd love to write a really great book one day that will be read for a long time to come.

* Steampunk is a genre of science fiction or fantasy writing often set in a post-apocalyptic future based on the 19th century's British Victorian era or American "Wild West", during which steam power is in mainstream use, or in a fantasy world that employs steam power. (Source: Wikipedia)

FOR MORE INFORMATION ON STEFAN BACHMANN

Jennifer Davies was the Editor in Chief of Hello Switzerland in 2014. Her career started as a news reporter and newsreader at the BBC and she is the only English language journalist ever to have been awarded the top broadcast journalism prize from SRF (Swiss Broadcasting Corporation). Jennifer has lived and and worked for nearly a decade in Zurich, during which she has edited 7 magazines and broadcasted for BBC, SRF and Monocle among others, including international corporate clients.

Featured Partners Thanks to all supporting partners of Hello Switzerland

About Us Relocate Your Employees Partnerships & Media